The Mass Communication Area of the Department of Languages, Literature and Aesthetics (LLA) under the School of Liberal Studies (SLS) organized a two-day workshop on Contemporary Media and Society by internationally acclaimed journalist and Ramon Magsaysay Awardee P. Sainath on October 17-18, 2019. Sainath, who was the Rural Affairs Editor of The Hindu, is the founder editor of People’s Archive of Rural India (PARI), an acclaimed digital platform that primarily focuses on rural journalism. The workshop was coordinated by Ms. Amrita Chakraborty, Assistant Professor of Media from SLS.

His workshop primarily focussed on the current state of media in our country and its corporatization, paid media, rural affairs and ethical considerations in media.

On the first day of the workshop, Sainath started his lecture with the ethical question of ‘what is good journalism?’ The question drew a lot of attention among the audience when they shared their opinion about fake news and propaganda. He further discussed about the ethical protocols of journalism and its intent, security and privacy of an individual and the likes.

The next topic of discussion was about the role of journalism in the freedom struggle of India. While discussing further, the role of great freedom fighters and leaders such as Raja Ram Mohan Roy, Jawaharlal Nehru, Mahatma Gandhi and Bhagat Singh were talked about.

On the second day of the workshop, the session began with a discussion on ‘paid news’ and ‘corporatization of media’. The discussion led onto the topic of journalism as a revenue stream, the problem of hyper-commercialization and other scandals.

Lastly, Sainath discussed in detail about the coverage of rural India in the mainstream media. He further threw light on the work done by his organization PARI and how it has been telling stories of the 833 million people of the country.

The workshop ended with a huge round of applause, and a standing ovation by the audience. Lastly, Prof. Pradeep Mallik, Head of the Department from the Department of Languages, Literature and Aesthetics (LLA) greeted Sainath with a souvenir.

A recipient of the Ramnath Goenka ‘Journalist of the Year’ award, Sainath was hailed by Amartya Sen as “one of the world’s greatest experts on famine and hunger”. The University of Alberta honoured Sainath with the Honorary Doctor of Letters degree (D.Litt.). He was also the McGraw Professor of Writing at the University of Princeton. His best-selling book ‘Everybody Loves a Good Drought’, published in 1996 by Penguin Books, is considered one of the finest texts on rural poverty and farmers’ distress. 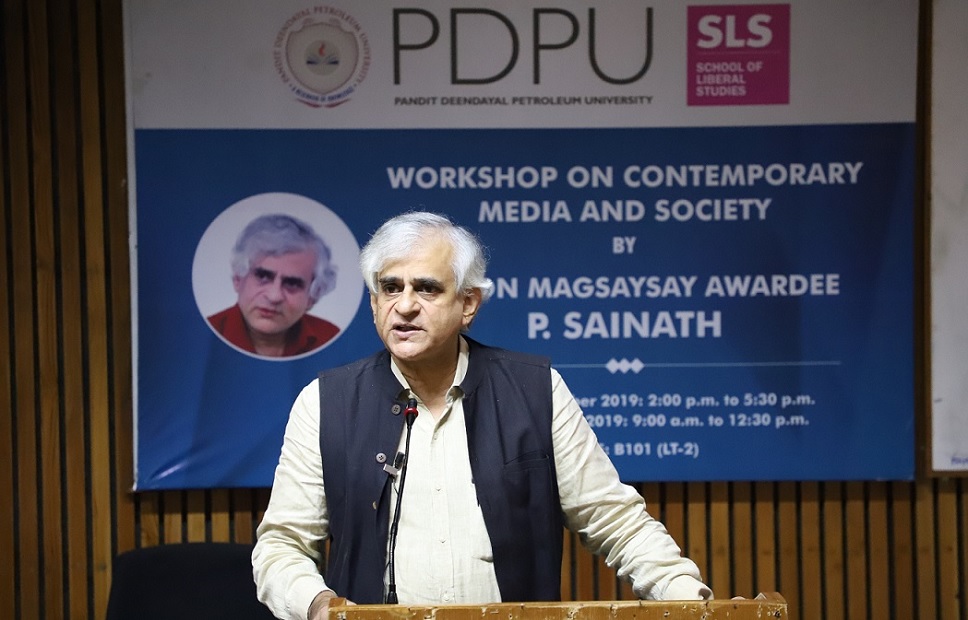 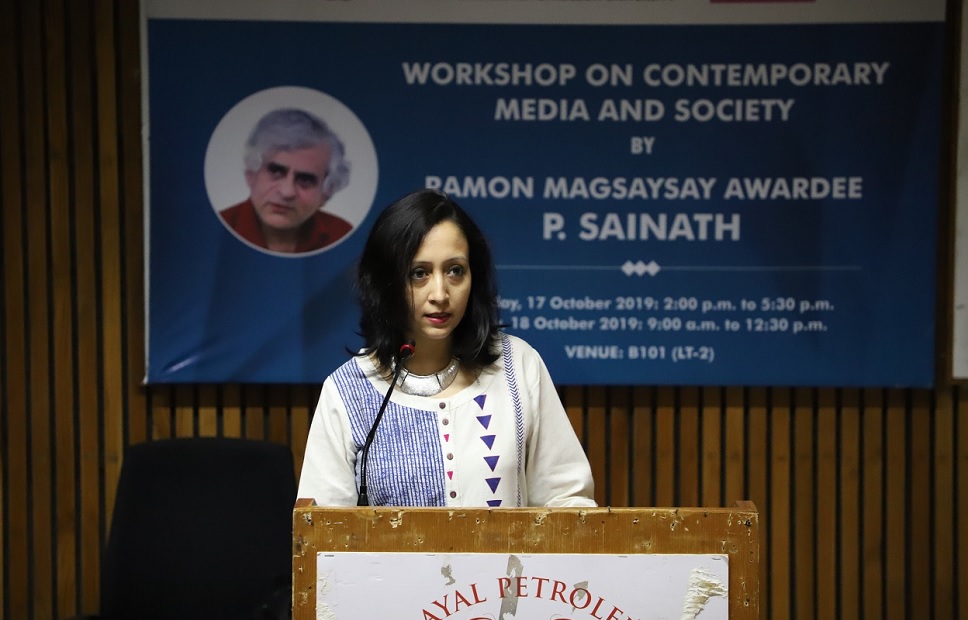 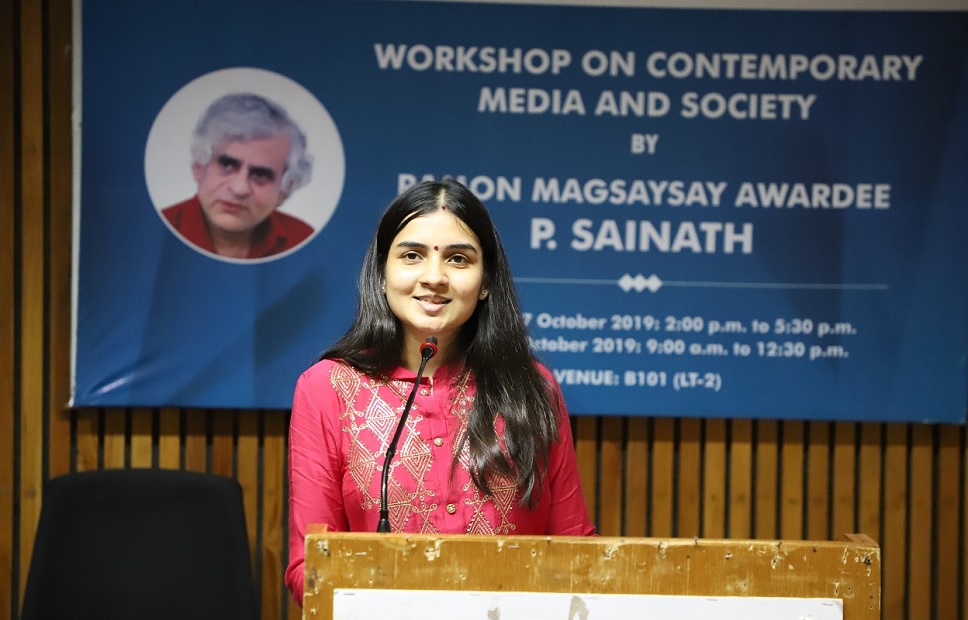 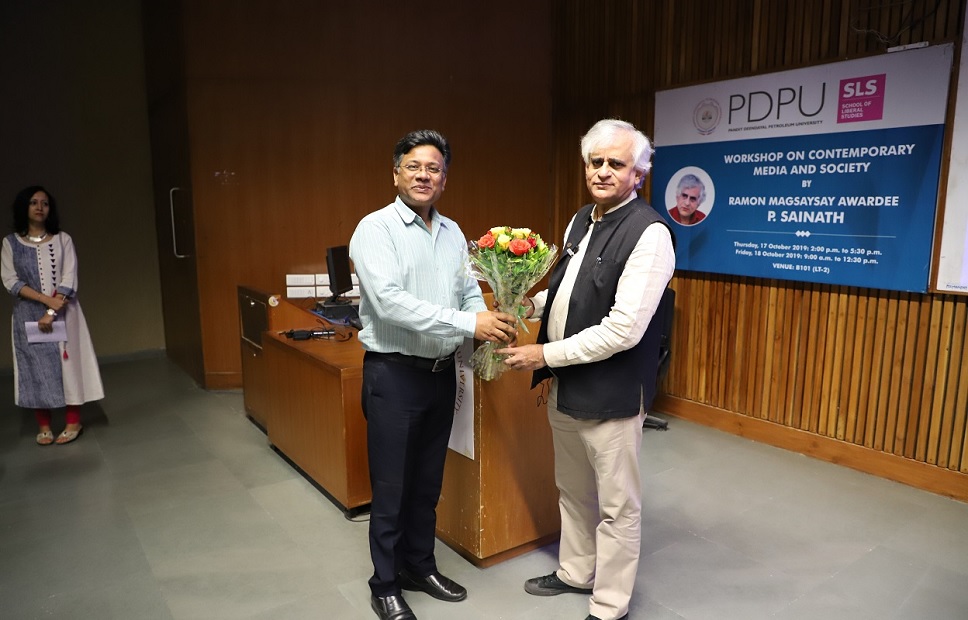 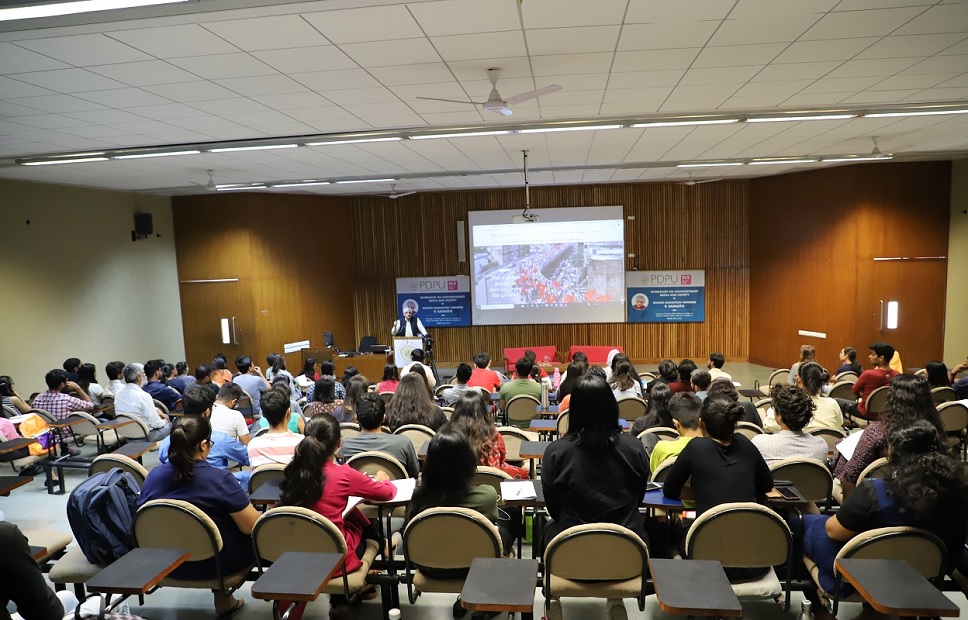 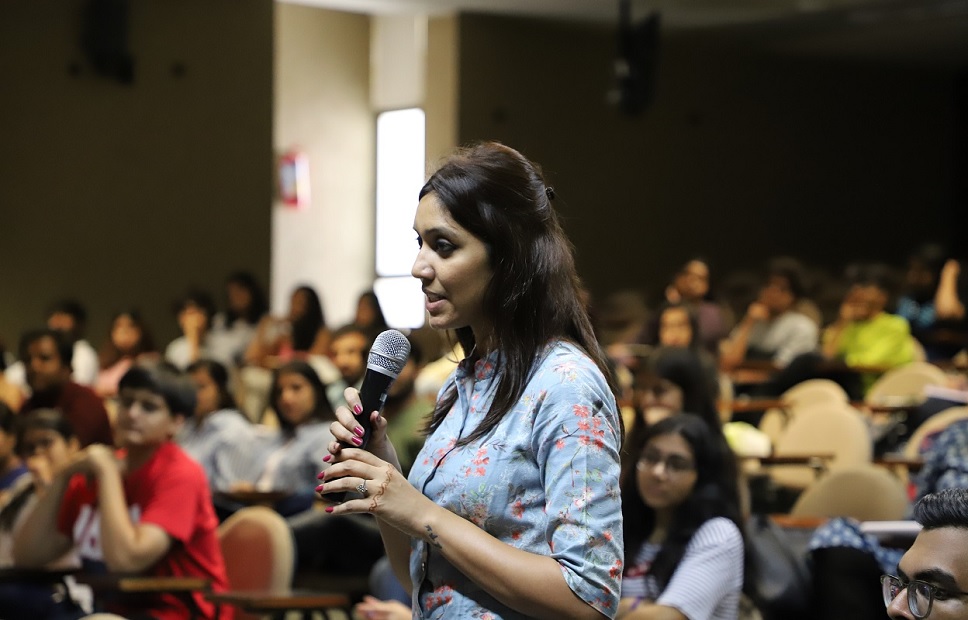 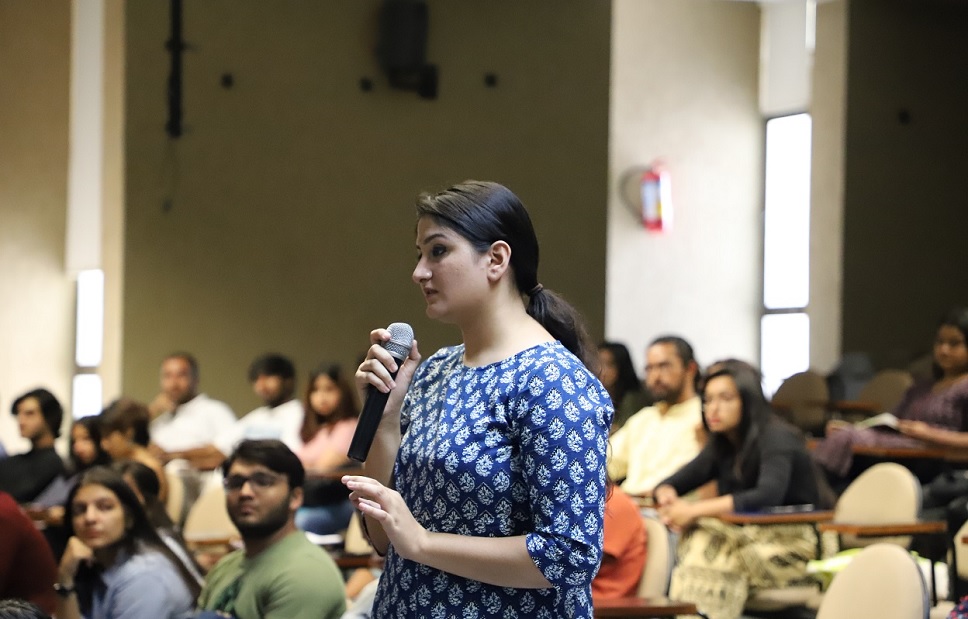 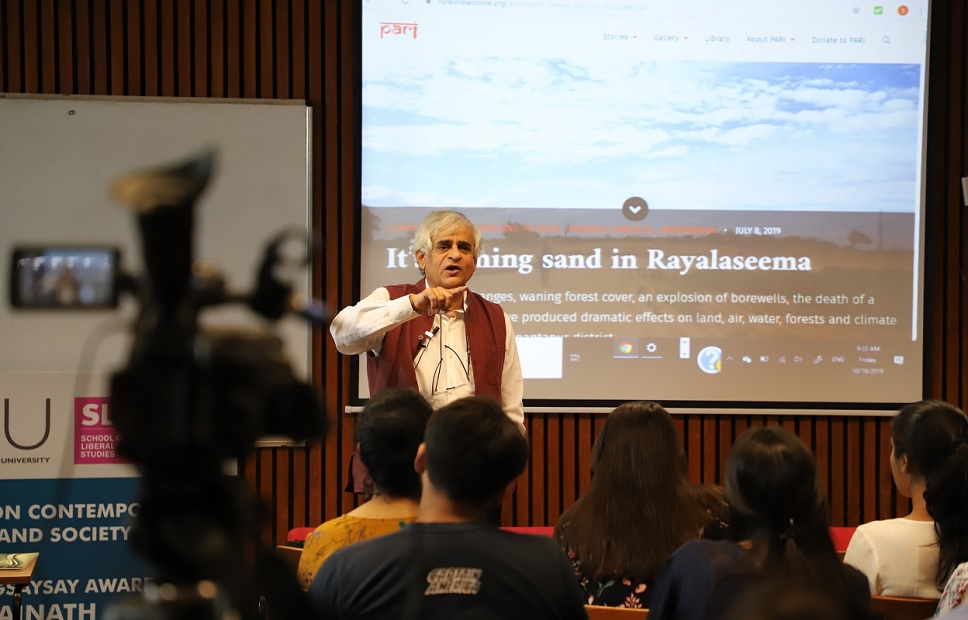 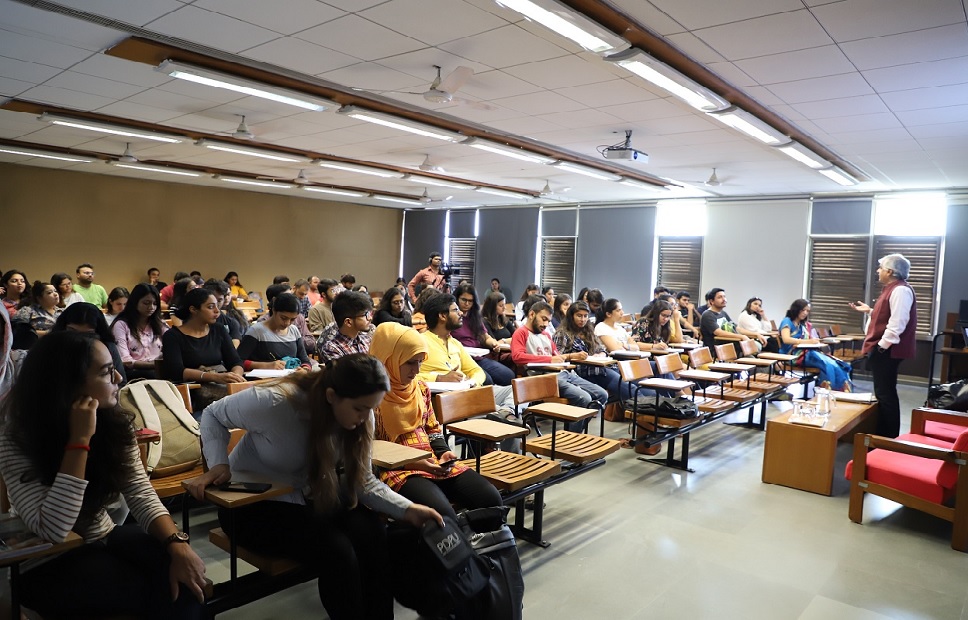 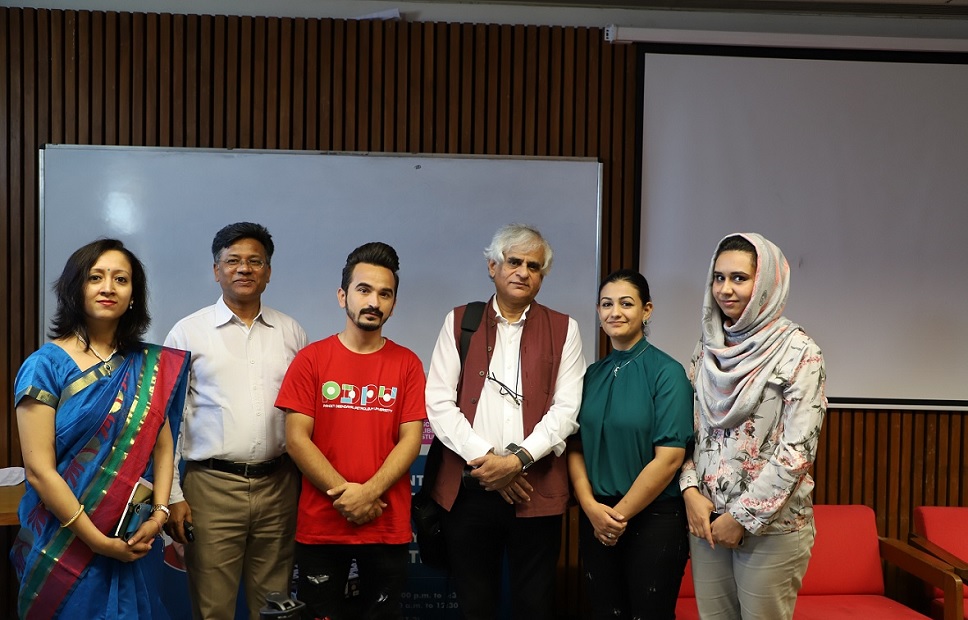 January 28, 2019: Pandit Deendayal Petroleum University (PDPU) in Gandhinagar hosted a Distinguished Lecture by Ms. Amala Akkineni, an actress of repute and Director of Annapurna International School of Film + Media (AISFM) in Hyderabad, on January 28, 2019. The lecture was focused on the topic, ‘The Silver Screen – Art, Science or Business’. The event started with the felicitation to Ms. Akkineni by Prof. Nigam Dave, the Director of School of Liberal Studies (SLS) under PDPU. Thereafter, Ms. Amrita Chakraborty, a Lecturer of Media and Communications at SLS, delivered the welcome note.

Sharing her vision and that of her institute, Ms. Akkineni highlighted the dire need of creating an avenue that trains the next generation and helps them receive the skills required to take Indian cinema to the next level, i.e. an avenue that is not only superlative, but also accessible.

By presenting some intriguing statistics relating to the Indian economy including the media and entertainment industry, she elucidated how the business of the film industry is growing faster, which in turn will create a large demand for trained professionals and creative content.

She also threw light on how cinema, being a medium of entertainment, is a combination of many things and expertise. People from a wide range of backgrounds work in developing a film. There are storytellers who present their ideas to the financiers and finally a team of creative people execute the vision. Cinema wouldn’t be the magic that we see it as without any one of these individuals.

The talk was interspersed with insightful and witty anecdotes. She also quoted the examples of several films that showcased the pinnacle of some elements which were talked about (such as VFX, graphic design etc.). The lecture ended with a round of thought-provoking and interesting questions by some students, which were answered in detail by Ms. Akkineni. Some questions were asked about the future of Indian regional cinema, Blue Cross of Hyderabad (an animal welfare society founded by Ms. Akkineni and her husband), and also about balancing her career of being both an actor and a director of the institute.

This insightful and interesting lecture ended with a concluding note and a vote of thanks by Prof. Nigam Dave. 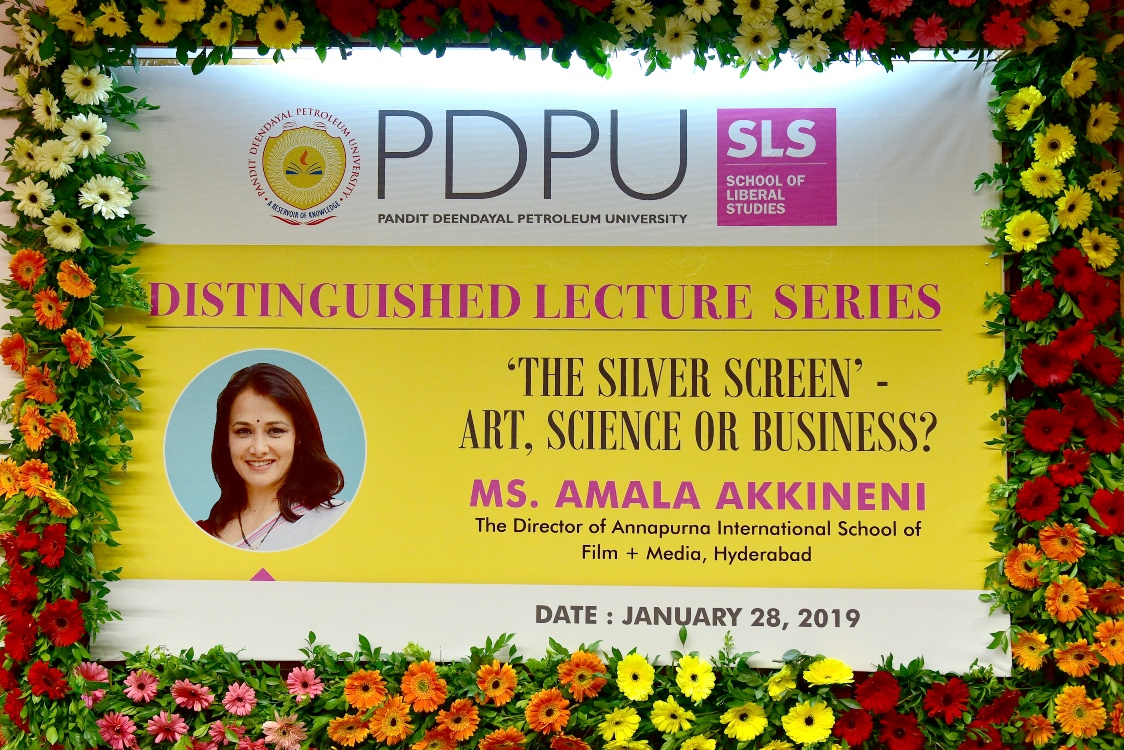 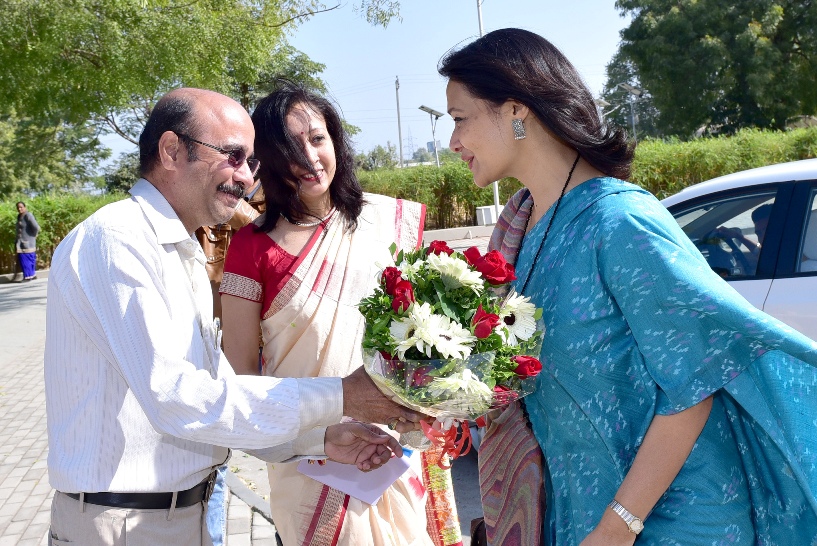 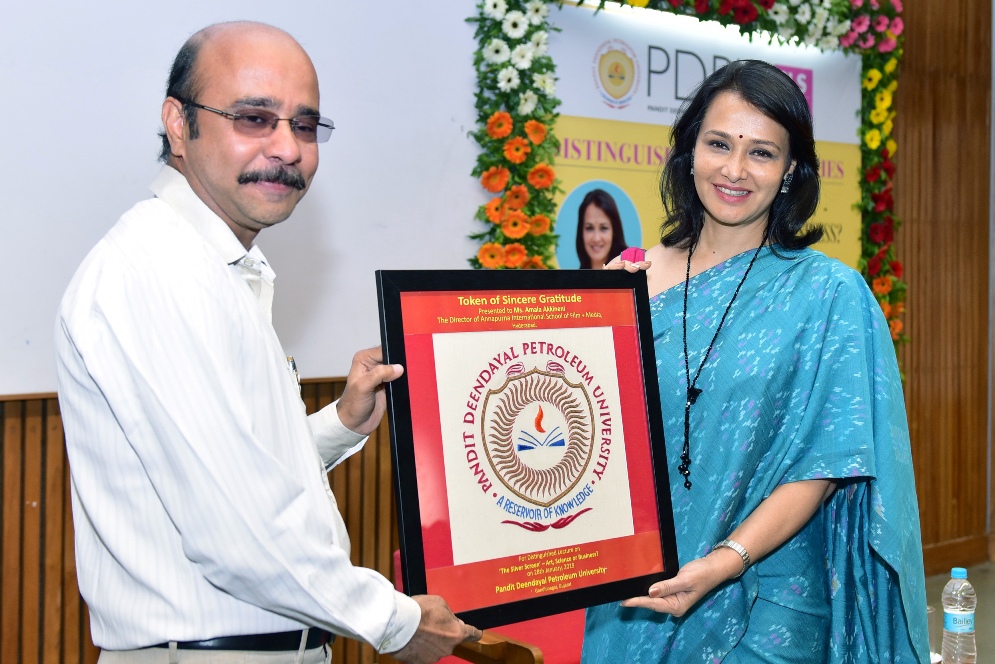 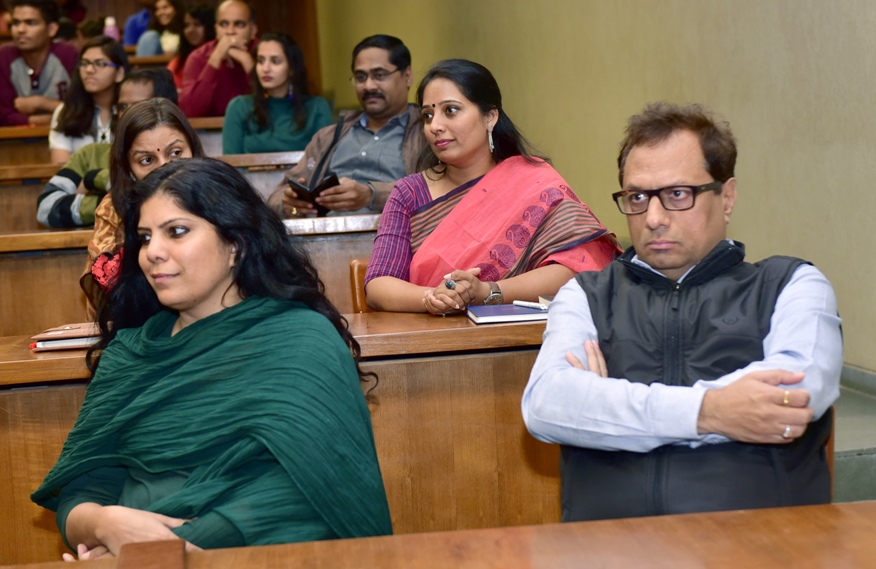 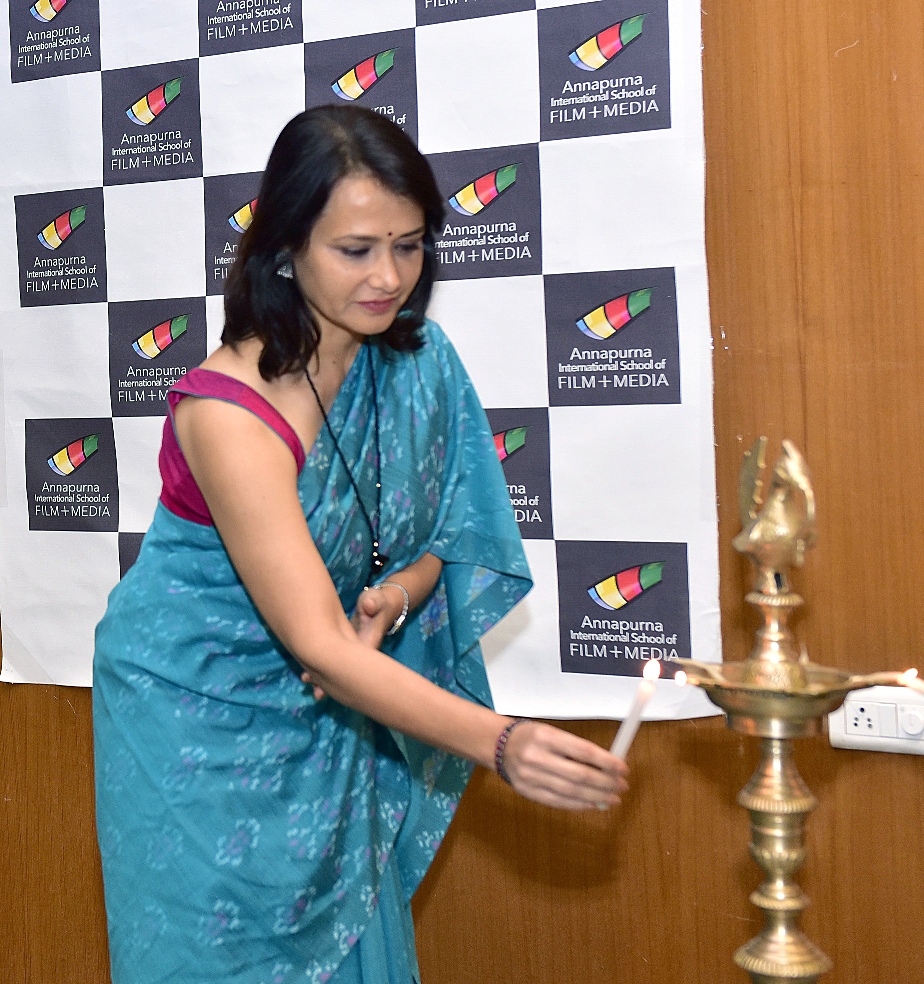 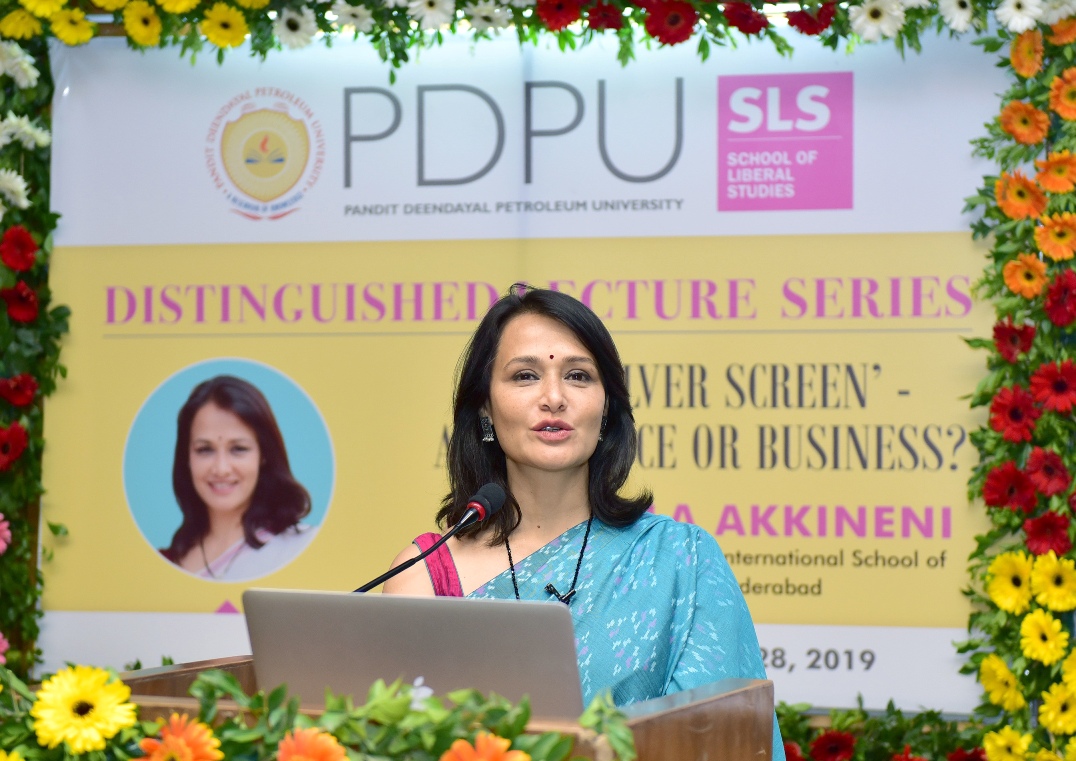 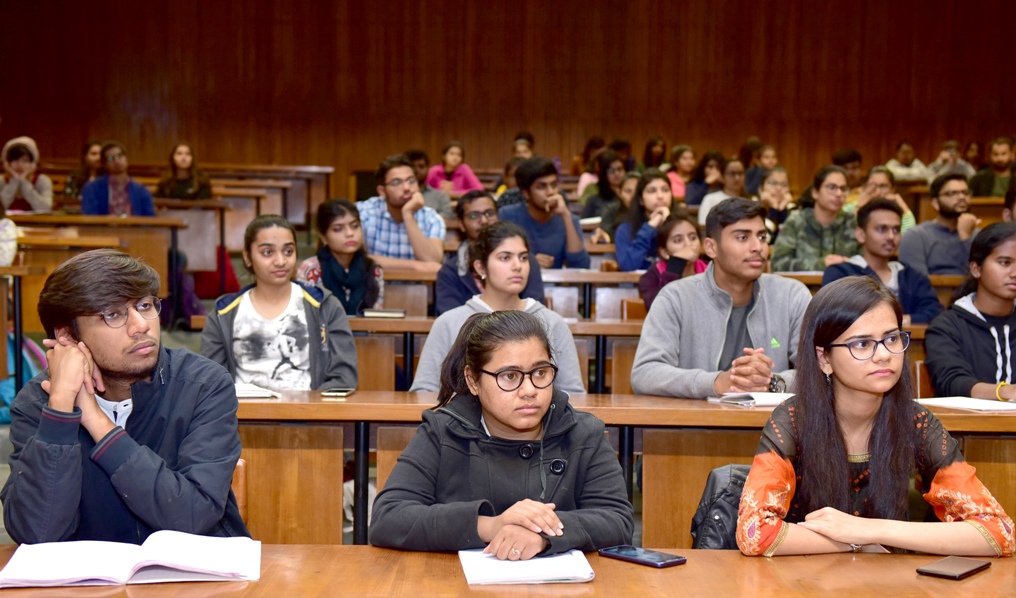 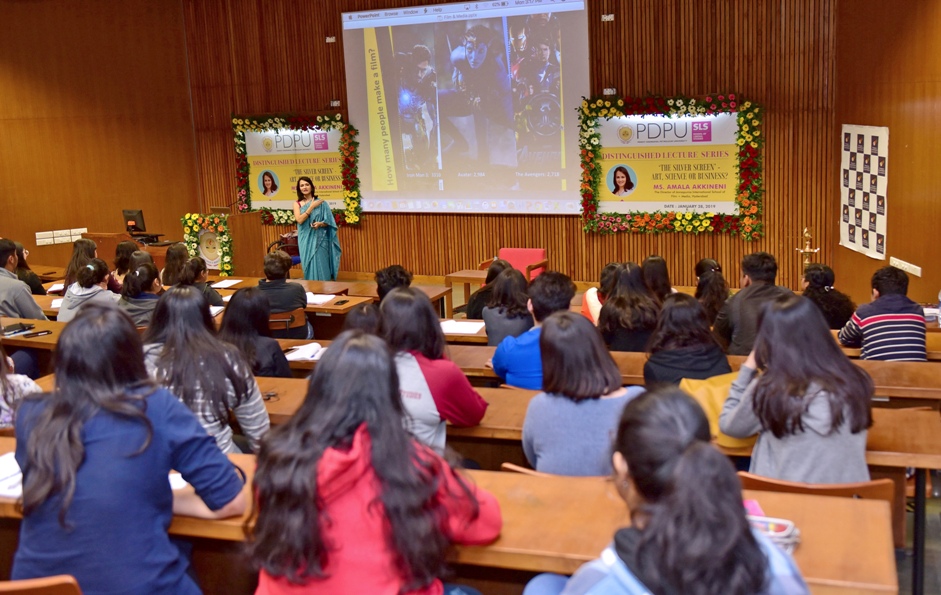 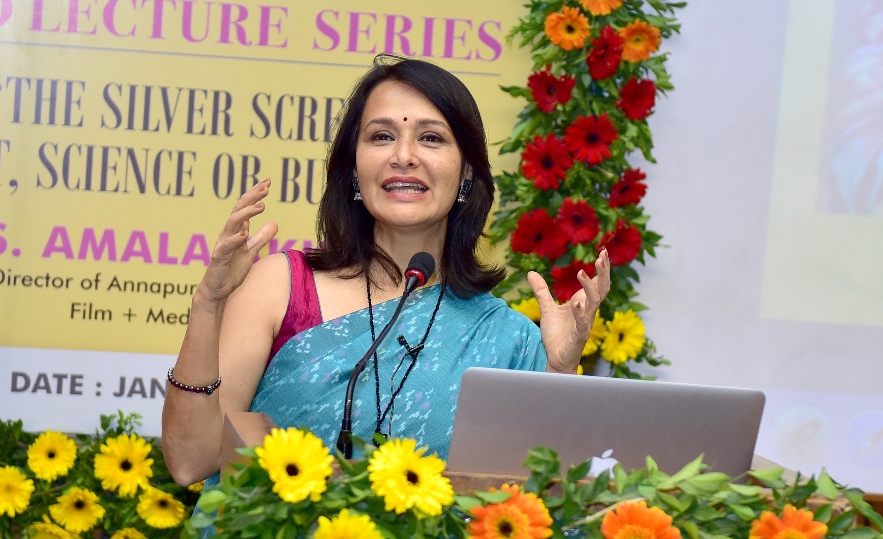 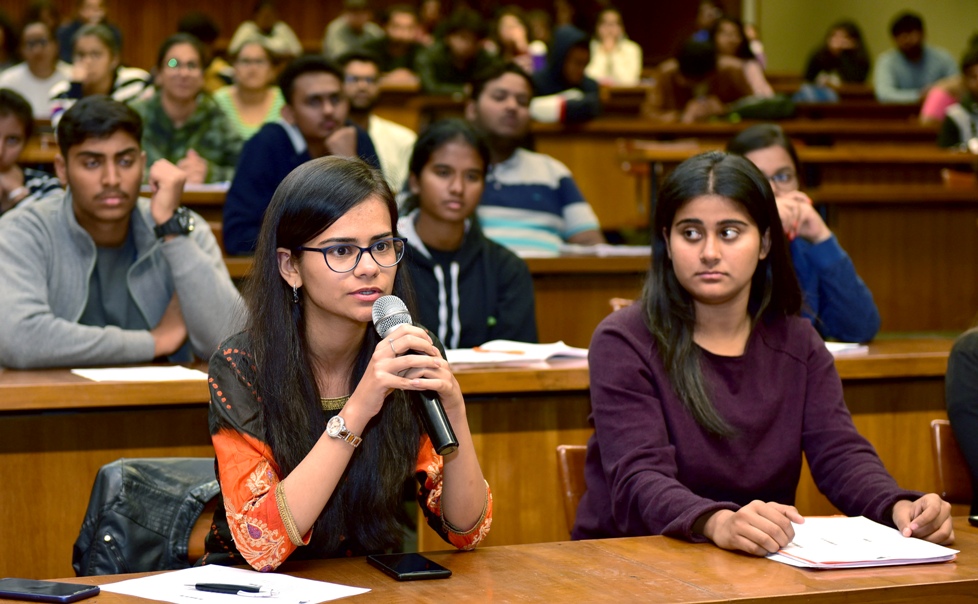 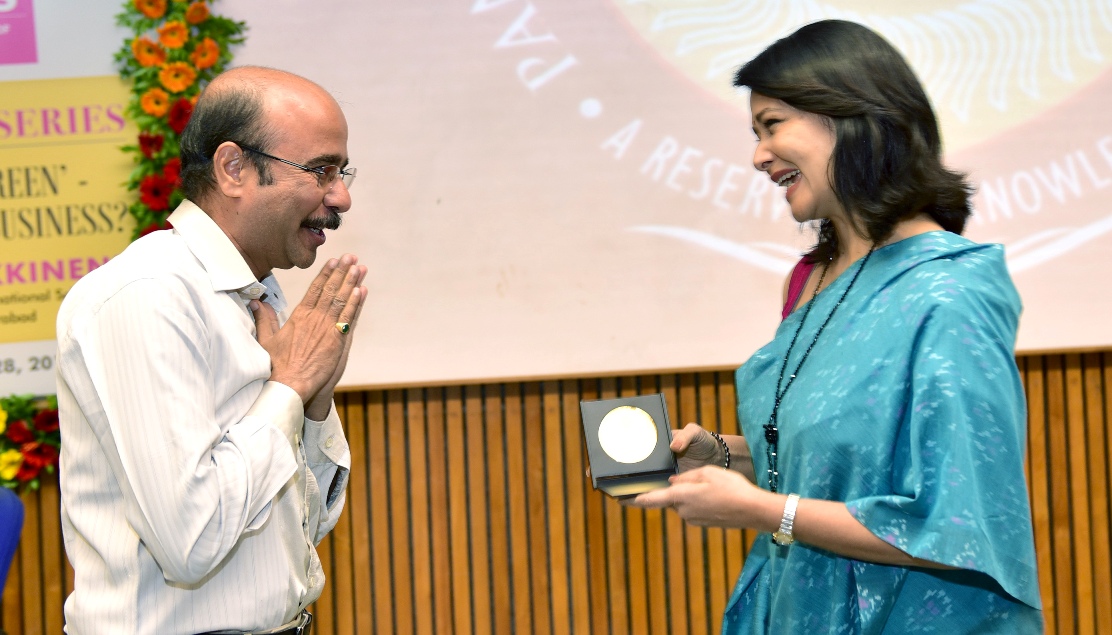 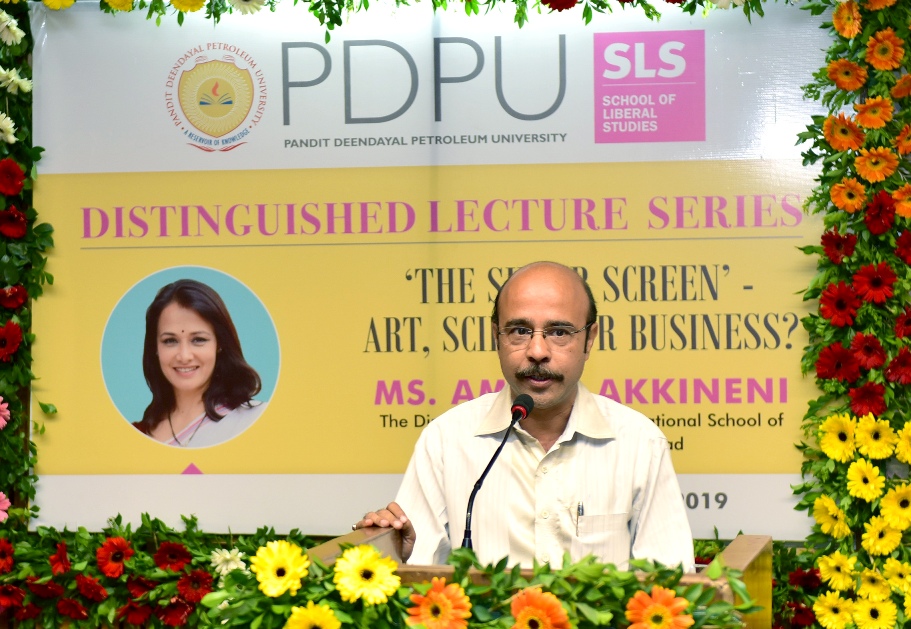 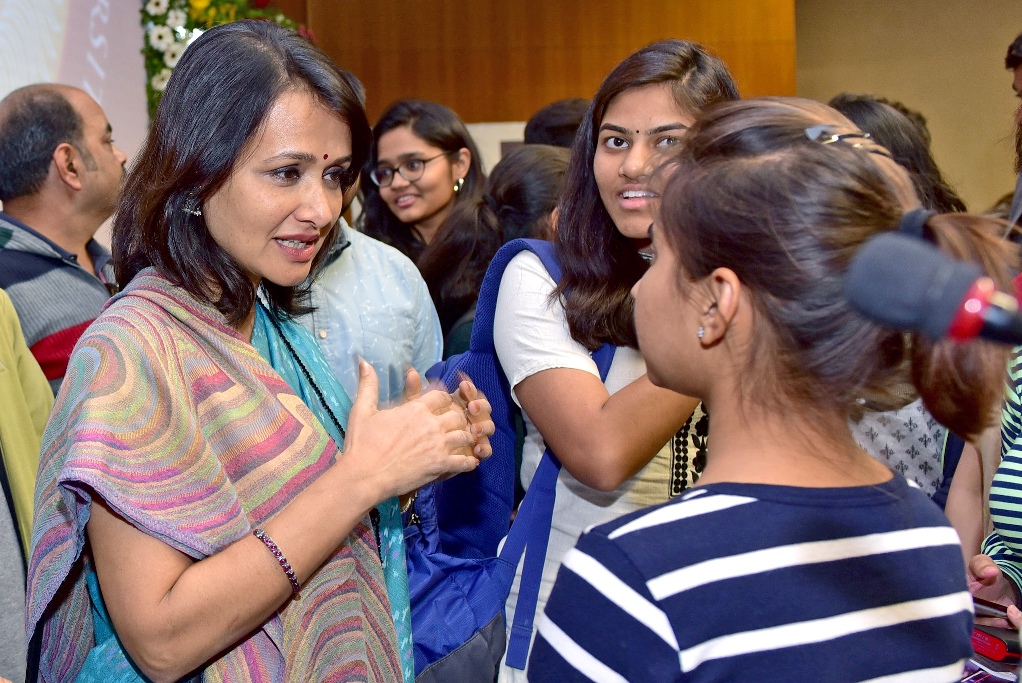 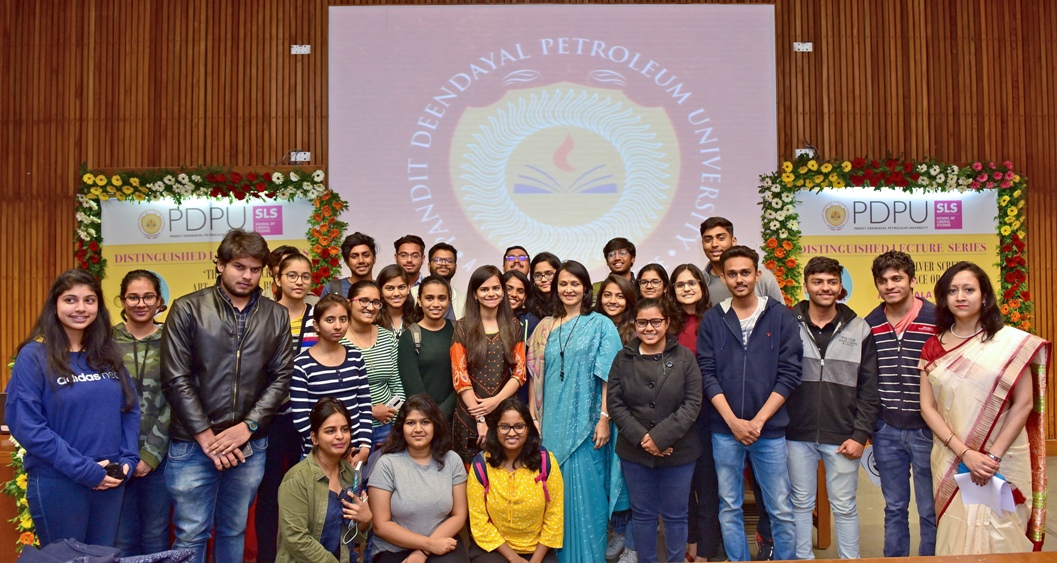